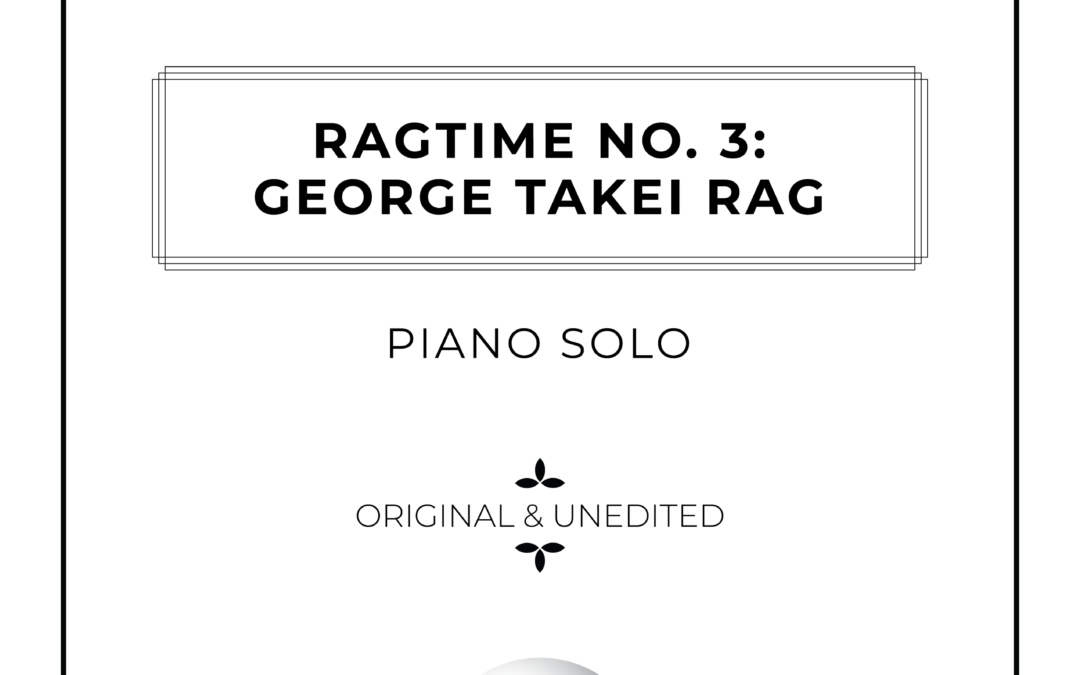 DESCRIPTION
A concert rag based on the life of George Takei. Traditional AABBACCDD form.

This piece is composed off the letters of George Takei’s name (just continuing the additional letters of the alphabet up the scale after A-G), and from patterns created by other words and names from George’s life. (I’ve marked out where the notes are derived directly from his name in the first melody.)

The first section is composed off of the letters of George Takei’s name, and is intentionally upbeat and optimistic. The theme is intended to represent his youth, his early family life, and his overall personality. I had the pleasure of interviewing Mr. Takei by phone once a few years ago, and it was a delight speaking to him.

The second section represents the internment of Japanese Americans during World War II. It is a sad part of America’s history, and George Takei has made it part of his life to bring awareness to a time when America didn’t behave so beautifully. The section is composed in a minor key, reflects the melodies of songs of Americana, and is intentionally composed so the melody and the accompaniment are not lined up, as the situation at the time was not in alignment with our country’s principles.

The third section is all about Hollywood. The melody plays on the many celebratory melodies about Hollywood and show business, right up to the “big finish” cadences that lead the section into…

The fourth section comes as a surprise and suddenly turns a corner into very different places than the earlier sections, while intentionally keeping rhythms and references to other moments in the piece. The melody (if I do say so myself) is classy and sophisticated, even “cool” and musically represents how Mr. Takei says, “Ohhhh, myyyy!” The proud protagonist has found his stride, and it’s more than just OK to be Takei.

While it IS nice to be the one person on the program with no 2nd date behind my name, as that 1ST date gets farther and farther into the past, even concert posters are becoming existential!

For today's #MusicMonday #MondayMotivation @arthurbreur offers you the rousing "In the Hall of the Mountain King" from Peer Gynt Suite No. 1 by Edvard Grieg. (Included in the upcoming December 5 concert by @TualatinSymph):

Floating Home Music is excited to have the opportunity to share the music of Canadian composer Gerry Busch—and his music is all available for free!